How to survive the weather of a British festival 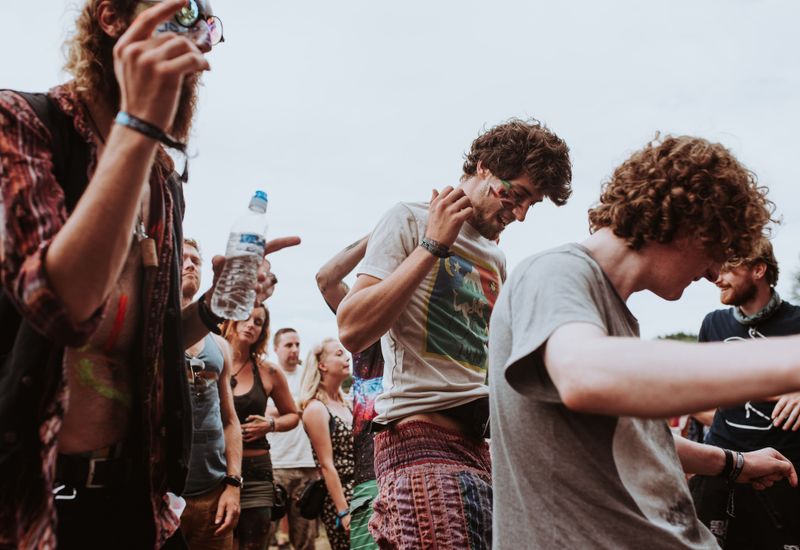 With Reading and Leeds just around the corner, we've put together our top tips on surviving the weekend if a storm decides to hit...

‘What a scorcher,’ said nobody since mid-July. Festival season is starting to unwind, edging us ever-closer to the lacklustre temperatures of autumn. Sometimes, the autumn brings that rare warm September/October surprise. Or, the opposite.

So what’s a festival lover to do? Load up with waterproofs and wellies? Or risk it all for tiny shorts and a bikini top look? We’ve tried out every combination of these looks, so we’ll share what we’ve learned with you.

Let’s start from the top.

For those with a tendency to shriek, ‘my hair!’ whenever the heavens open, we recommend you invest in some sort of hood. At least once over the weekend you’re guaranteed to put it to good use. Even if it’s to protect yourself from half-drunk, flying beer cans.

While hats are great costume additions, they risk being forcibly removed from your head by a passing drunkard – never to be seen again. If you do choose to go down this route, on your head be it.

For your own sake, pack long sleeves and long trousers. This is the UK. Think how cold you’ll be at night. When you’ve got a beer jacket on, everything’s sweet. But you will wake up shivering at some point. And if you get ill, you are in one of the worst environments imaginable to attempt recovery.

While you’re at it, bring something waterproof. There are so many awesome ponchos available online for a couple of quid a hit. Or, go all out with a full-body anorak. You’ll be dry at least.

DO NOT WEAR CANVAS TRAINERS. We’re speaking from experience here. Trust – they just aren’t right for a festival. You’ll slip, slide and shiver your way through to trench foot. Well probably not actual trench foot, but you’ll be really uncomfortable and have to keep putting them back on wet. You’ll be cold and you’ll be sad. As soon as there’s any mud at all, they’re ruined. If it rains? Good luck, pal.

Bring wellies. Yes, they’re heavy. Yes, they’re uncomfortable. Yes, they’re kinda gross. But they’re so worth having with you. Failing that, some hardy walking boots or if you really have to wear trainers, bring hard-wearing ones that if you end up having to throw away, won’t make you cry.

Your mate will rock up with a pop-up tent and casually fling it into a spot where it puts itself up. You will be struggling with tent poles and guy ropes. You will be jealous they’ve already cracked open a beer. Until the rain rolls in and they emerge from their leaking hell, miserable. You, however, will unzip your proper tent (that you got because you’re responsible) and come out smiling. Because you’re dry. And you’re a winner. Besides, have you ever tried to pack a pop-up tent back down into its bag? Ha.

Another key part of surviving the British weather while camping is to never, ever pitch up next to a path. Risks include: flooding, sinking in mud, trampling, drunk people falling into you while you’re trying to sleep, and if you’re very unlucky, people thinking it’s ok to relieve themselves near or on your tent.

The place new profile pictures are born. There’s always something cool to pose in front of. But what if the weather’s killing the setting? You’ve got to be on it with your timing or the whole thing’s ruined. Our advice? Get off your phone, you could do with preserving battery and besides, ‘pics or it didn't happen’ is lame.

The front of any stage is going to start resembling an enormous mud pie by the end of day one. This is where your handy non-canvas shoes come into play. Even the covered tents will end up like this, so do yourself a favour and be prepared.

Just occasionally a British festival will surprise you by being hot and dry the entire time. Savour it. It’s likely to be the only time in your life that it happens. Our advice is to get water with every drink. You probably won’t. But do try and get at least a couple of litres of water in your system every day. Your hangovers will be far more manageable and you’ll dodge dehydration.

Our final words of wisdom: get yourself a big old container to store water in your tent. When you’re hiding from storms, wind or rain (or even scorching heat), it can be made bearable if you can just get your hands on some water. You won’t have to leave the tent and brave the rain… Until it’s gone through you of course. Then you’re on your own.