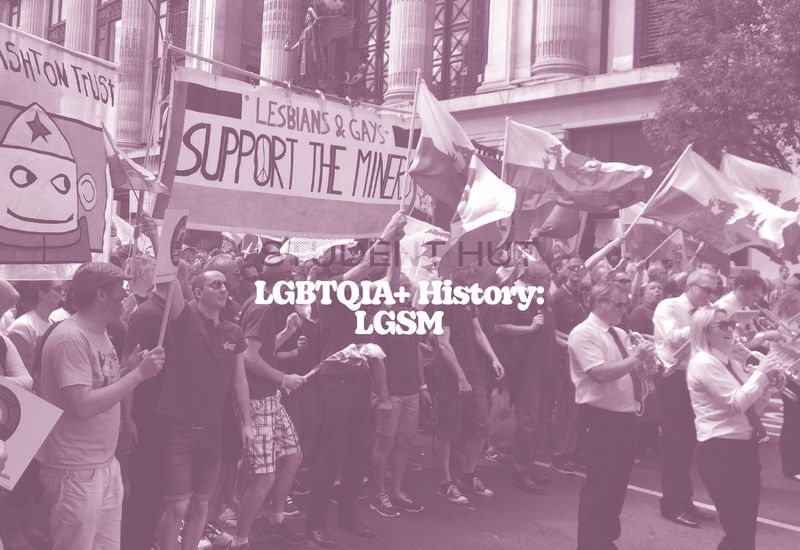 This June, celebrate Pride Month and take some time to remember key moments in LGBTQ+ history.

Workers’ strikes can be a contentious topic, with right-wing politicians and the media taking a firm stance against those acting to change things for the better. But the movement Lesbians and Gays Support the Miners (LGSM) was one group that stood in solidarity with striking miners in the 80s.

You may know of this movement from the film Pride (2014). While it was adapted for cinemas and injected with drama and comedy, the film talks about real events. Many of the characters and locations are based on those from the history of the movement, including the Gay’s the Word bookshop.

What brought these groups together?

The 80s were a difficult time to exist as a gay person. But it was also a difficult decade to be working class. The Prime Minister at the time, Margaret Thatcher, was trying to reduce the power of the trade unions. Manufacturing industries and coal mines were being shut down, leaving many without jobs.

This had a wide impact on the economy of the areas affected, notably communities in Scotland, Wales, and the North of England. The impact of these closures is still felt today by communities neglected by underdevelopment.

The UK miners’ strike from 1984-85 was an attempt by miners and their unions to combat this dismantling of their industries. As the film Pride shows, at this time many LGBTQ+ people noticed that the levels of police harassment against them were directed toward the striking miners.

Lesbians and Gays Support the Miners

After Thatcher had sequestered the funds of the main mining union, meaning that they couldn’t access their money, other support groups were encouraged to help. ‘Lesbians and Gays Support the Miners’ was one such group formed from the Communist Party of Great Britain. They formed after raising funds for miners at the 1984 Pride parade.

The work they did grew to the point where they had to start using larger venues for their fundraising. In total, they raised over £20,000 for families of striking miners. The Electric Ballroom in Camden saw their largest single fundraising event, the brilliantly named ‘Pits and Perverts’.

What is the impact of LGSM today?

This forged a bond between trade unions and gay rights activists. Many mining groups later lent their support to LGBTQ+ causes, establishing the progressive nature of labour groups in the UK. It serves as a reminder of a time when two completely different marginalised groups worked together to achieve great things.

Along with the film, the group has been celebrated many times. The People’s History Museum in Manchester has an archive of the group’s activities and they were invited to the 2015 Birmingham Pride. The movement has reduced in capacity over the last decade, however their impact still lives on.

What LGBTQ+ topics would you like us to cover? Join our panel and let us know. You’ll get 1000 reward points for signing up.