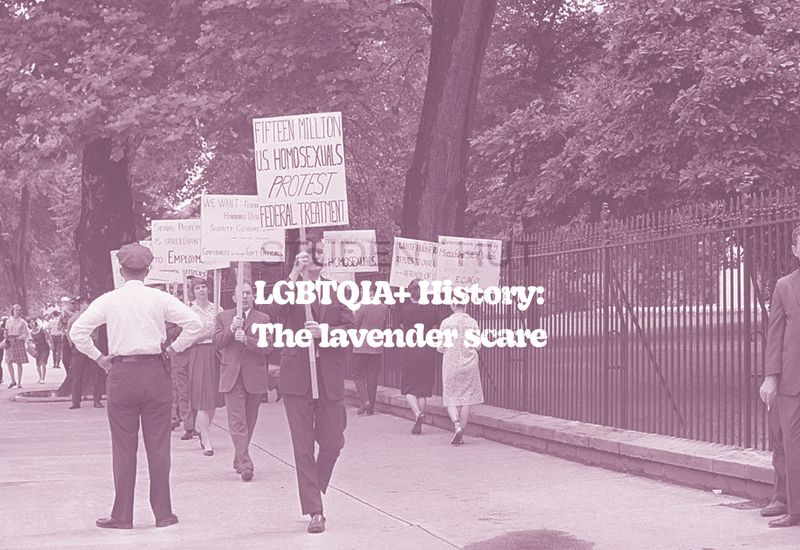 An example of institutional homophobia, the lavender scare is part of the USA’s history of anti-gay legislation.

Following World War I, the Russian revolution of 1917, and subsequent communist revolutions in other European countries, a moral panic about communism began. The US government portrayed anything vaguely left-leaning as threats to American society. Immigrants from newly communist European countries were vilified and deported and free speech was restricted.

After World War II, a second red scare spread across the US. This was heavily influenced by the politics of Senator Joseph McCarthy. McCarthyism became synonymous with accusations of treason, communist sympathy, and subversion. There were many campaigns of fear-mongering around communist, anarchist, and socialist influence in federal positions.

Where did the term "Lavender scare" come from?

In the runup to the 1952 elections, Senator Everett Dirksen stated that a Republican victory would bring about the removal of so-called ‘lavender lads’ from the State Department. This term was used derogatorily towards gay men and was where the name lavender scare came from. The first use of ‘lavender scare’ came from the 2004 book of the same name by David K. Johnson that detailed the events.

What was the law that enabled the lavender scare?

Among the policies enacted in the 50s was executive order 10450 which barred homosexuals from federal positions. As a result, gay men and lesbians were not only ousted from jobs but also had their sexuality revealed to the world, whether they wanted to or not.

The association of communism with ‘subversive’ behaviour led to many gay people being automatically seen as communist sympathisers. Whether this was a genuine belief or a convenient tool to strip away rights from those labelled as ‘sexual deviants’ remains to be seen.

What is the impact of the lavender scare today?

McCarthyism was dealt a blow by the Cole v. Young ruling which made the dismissal of federal workers for discriminatory reasons more difficult. But it didn’t quite end there. Executive order 10450 wasn’t removed until 1995 and continued to bar gays from the military until that point.

In 2017, the State Department issued a formal apology about the dismissal and harassment of gay workers during this time. The senator who encouraged this apology, Ben Cardin, did however note that investigations into State Department employees’ sexuality continued into the 90s.

Which LGBTQ+ topics do you think we should cover more? Join our panel and let us know. You’ll get 1000 reward points for signing up.