Countering Culture: The rise of Witchtok and modern Paganism 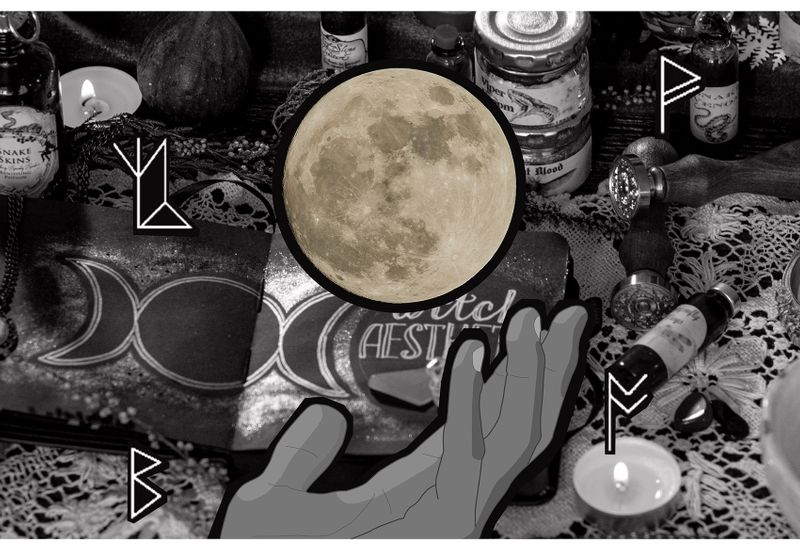 You’ve probably seen this spiritual content on TikTok, but where did it come from?

The eerie chill in the air is coming as Halloween nears, marking the time for us to get spooky. The subculture of witches and witchcraft is something that has always been around, falling under the umbrella of many different sub-categories and religions such as Wicca and Paganism.

From the Salem witch trials to Sabrina the Teenage Witch, witchcraft is something that has always been around dating back to 721 B.C, and still remains relevant in people's lives today.

But as with all subcultures change is inevitable, especially with the rise of technology. So let’s take a look at the rise of Witchtok, modern Paganism and spiritualism in the contemporary age.

Before we’re able to make the judgement of how the subculture of witches has changed, we need to delve deeper into the history and world of witches before technology. Paganism and Wicca are often linked to Witches and Witchcraft but it is important to remember they are not the same.

Although all of these are different they are often combined. Witchcraft has always faced a tough battle, with more than 80,000 accused women dying within the span of 160 years. Most deaths and accusations were fueled by biased hatred or misogynistic opinions, doing very little for the rights of women at the time.

How Everything Has Changed: The Whitewashing Of Witchcraft

Slowly over time witches and witchcraft became more commercialised and televised, easing the public's uncertainty and hatred, making the classic witch figure a staple Halloween icon, ignoring the depth and knowledge that goes into the subculture of witches.

The rise of the niche on TikTok has shown the lack of diversity, as the tag #WitchTok is filled predominantly with white women practising spell casting, purification and burning sage. The irony of the situation is that throughout history white colonisers have shamed and marginalised these communities and practices with violence, but are now being practised and praised by people viewing them as “mystical” and “cool”.

This subculture has suffered a great deal of whitewashing and racism that’s rooted even in the deepest part of history, starting with the often-used terms “light” and “black” magic, the good vs. bad. Delving further into this seemingly innocent terminology we’re faced with the lingering effects of imperialism and slavery. The colour of good and pure magic used to be represented with yellow and gold, linking to the sun, while the colour black was linked with life, nourishment, and fertility. This racially influenced shift in the meaning of black magic came about around 1871 and was linked to racial oppression and division in Western culture.

People have argued that the subculture of WitchTok is a community raising women up and empowering them spiritually, an understandable argument as covens have always consisted of powerful women. Whereas, the people who argue that it’s colonised, noticed the rise of WitchTok came with all other commercial-based TikTok niches such as cottagecore and e-girls, questioning the authenticity of some of the people in the community.

Many witchcraft practices originate from Native America, South Asia and Africa, some being highly sacred and “closed”, meaning you can only participate if born into the community or initiated into it, something which some people seem to blatantly ignore. Although the rise in witchcraft on TikTok carries certain aspects of feminism, colonisation overtakes it. The TikTok creator @c0smicwitchery perfectly demonstrates the still deep-rooted colonisation of the witch subculture.

The Cultural Appropriation Of TikTok: And How Stay Clear of It

Smudging with white sage is a Native American ceremony and ritual. This “trendy” way to cleanse yourself and your surroundings, directly hurts Native Americans as wild white sage has become scarce, something many indigenous people rely on. Alternatively, you could try burning lavender, rosemary or Mugwort.

Another strictly Native American practice with great meaning that often gets brushed under the carpet and ignored. Spirit animals looked after either an individual or a group of people, not something a person simply resonates with. Be mindful of the power words have.

Dream catchers sold by indigenous people are not cultural appropriation, when sold by anyone else, they are. The creation of creating dream catchers is sacred and not something to be commercialised and mass-produced. Alternative items to use include witches' ladders and sachets filled with herbs.

Do you consider yourself spiritual at all? Join our student panel and let us know. You’ll get 1000 reward points for signing up.