Top 10 Student Cities in the UK 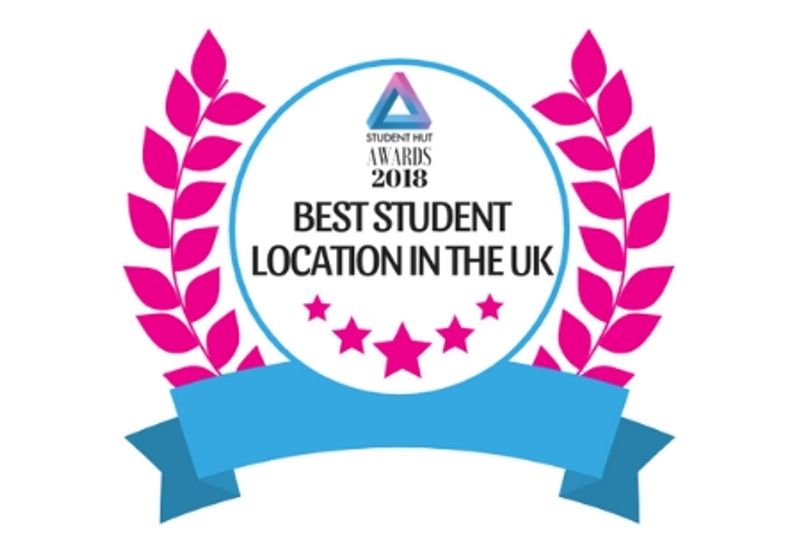 Choosing the right location can make or break a uni experience. After all, what’s a good university without the surroundings to match? Using reviews from thousands of students, we’ve ranked the top ten student locations in the UK.

How did we calculate the rankings?

Thousands of students spoke: we listened. Our students reviewed over 125 student towns and cities across the UK, rating the locations on a key set of criteria. With five stars being the highest possible score, and one star the lowest, we ranked all locations based on a weighted average rating.

What were the review criteria?

Students reviewed their towns and cities on six different criteria. We consider these criteria key to student experience:

So, which locations made the Student Hut top 10?

Howay the lads! Newcastle University and Northumbria University students rated their city the best student location in the UK. Whilst Newcastle scored highly across all review categories, students were particularly impressed by the city’s vibrant nightlife - including student-favourite trebles bars and independent music venues - and its plethora of spots for eating out.

Read what 117 students had to say about Newcastle. 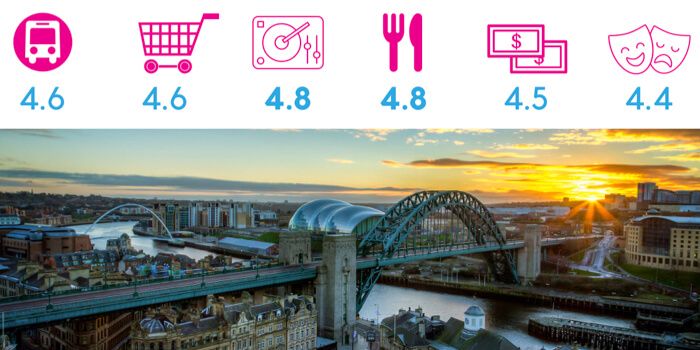 "Newcastle is the ultimate student experience, with student club nights held every night and week nights being incredibly affordable. Student accommodation is amazing, offering comfortable flats for every budget."

From the Tyne to the Mersey; Liverpool takes silver as the second-best city for students. Liverpool students deemed the city’s nightlife as its outstanding feature - perhaps unsurprisingly, Liverpool’s Concert Square is rated the best nightlife venue in the UK by Student Hut users. With a cultural heritage to match a contemporary ‘buzz’, Liverpool rightfully takes second place.

Read what 156 students had to say about Liverpool. 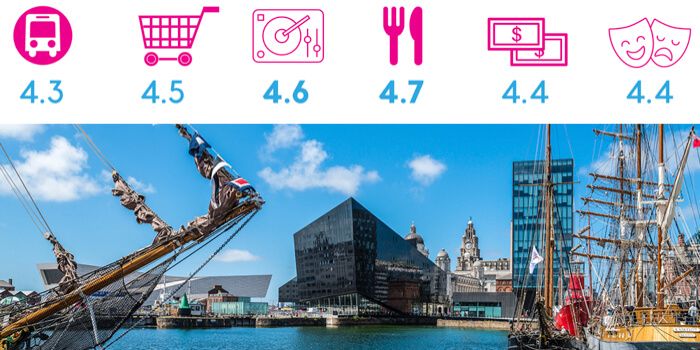 "Liverpool is a fantastic location for any student. The night life is superb and while Liverpool is a small, compact city, there's no shortage of pubs and clubs to head to. The cost of living is extremely cheap as well, especially compared to down south."

The visible remnants of Sheffield’s industrial past belie a warm, community-feel that so impressed Sheffield students - earning the city a spot in the top 3. A vibrant network of clubs and venues nurtures a healthy local music scene, whilst the nearby Peak District houses some of the most beautiful natural scenery in the UK.

Read what 232 students had to say about Sheffield. 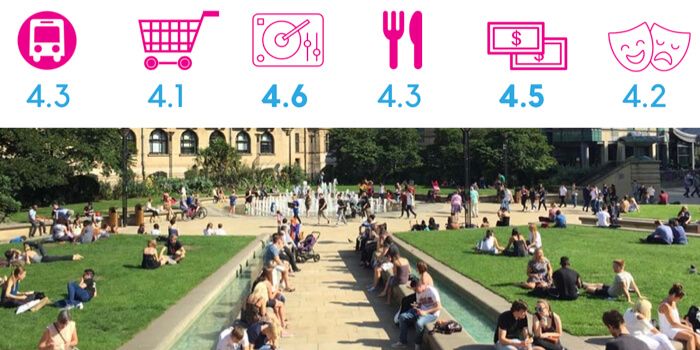 "Great city with plenty to do! The city is not too big and there's a nice community feel to the place. Good nightlife, beautiful surrounding areas (Peak District) and great people!"

With an estimated 99,000 students in the Greater Manchester region, Manchester is one of the most populous - and popular - student locations in the country. The Metrolink tram network earned the city a 4.5 rating for transport and super-clubs such as The Warehouse Project a 4.6 for nightlife. The dining out experience in Manchester is also second-to-none, with restaurants offering food originating from the Iberian Peninsula to East Asia.

Read what 196 students had to say about Manchester. 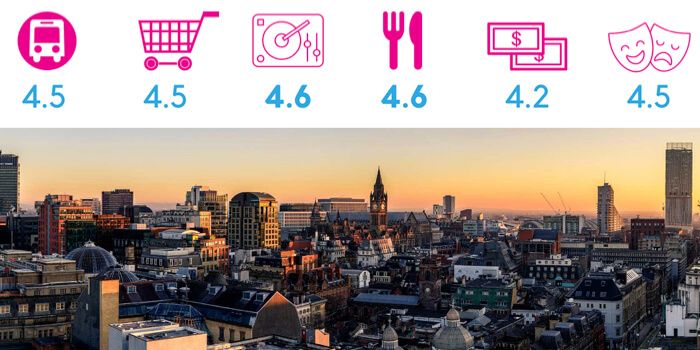 "Something about Manchester is truly magical and makes you never want to leave! Home to both a red brick and a met uni as well as music collages and other universities in surrounding areas such as Salford, Manchester is full of students and you will fit right in!"

For a well-rounded student experience, students can do far worse than Leeds. Scoring well for nightlife, shopping and eating out, Leeds truly has something for every student. Despite having all the trappings of a large city, green spaces are easily accessible - be it Woodhouse Moor in the city centre or the Yorkshire Dales to the north-west.

Read what 148 students had to say about Leeds. 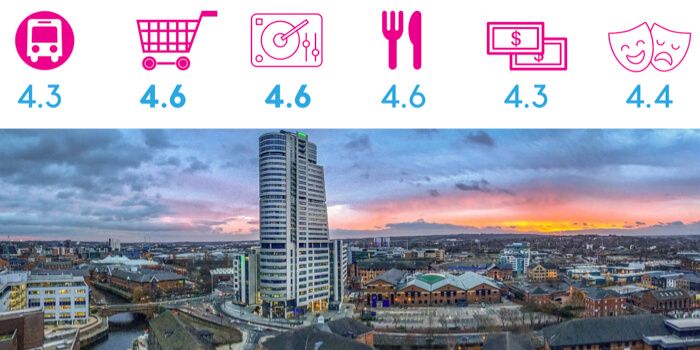 "Leeds has something to offer for everyone!.. you can take advantage of excellent and cheap bars, clubs and restaurants of every kind imaginable as well as a shopping scene good enough to compete with London."

The cheerful sea-side town ranks as the best student location in the south of England; sixth overall. With stunning pier-side restaurants, students from the University of Sussex and University of Brighton gave the city a commendable 4.7 rating for eating out. In addition, they thoroughly enjoy Brighton’s nightlife (4.6). Noticeably, there is an encouraging number of LGBTQ+ venues on offer, such as student-favourite Club Revenge.

Read what 164 students had to say about Brighton. 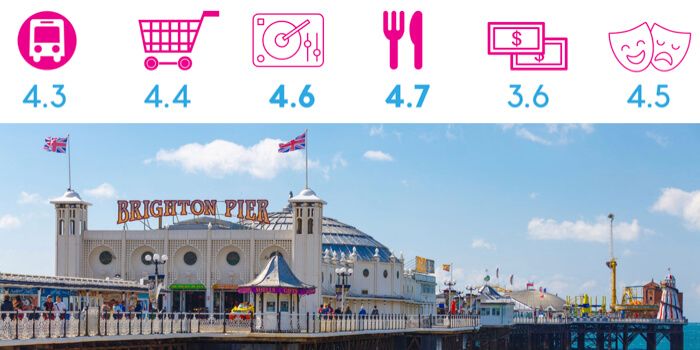 "Awesome nights out with many bars and clubs to choose from. Can be a tad expensive, but it is Brighton after all! Look for cheap student nights!"

Evidently, biggest does not mean best, but the UK capital still ranks at a highly respectable seventh place in the Student Hut League table. The Transport For London transport system - making the entirety of Greater London accessible at the touch of a card - earns the city an impressive rating for transport (4.6). However, the high cost of living in London is reflected by the 3.4 rating for value for money - lowest among the top ten.

Read what 842 students had to say about London. 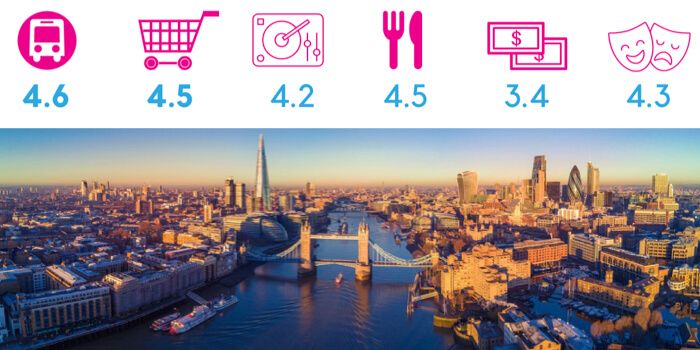 "London is awesome as a student. The nights out are at really cool clubs with great music and the chance to meet students from all over London is great. However the prices are expensive for everything from entertainment to eating out."

As the only location in this league table north of Hadrian’s wall, Glasgow flies the flag for students in Scotland. Glasgow’s student population were highly impressed by the options for eating out (we’d expect nothing less of the city alleged to have invented the chicken tikka masala!) and the nightlife (home to the highly-regarded Sub Club).

Read what 137 students had to say about Glasgow. 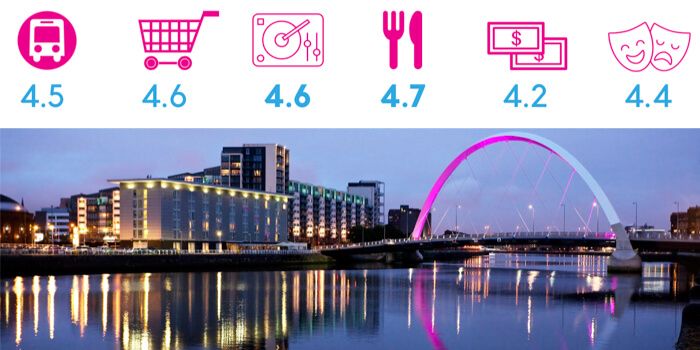 "Glasgow is a big city with a lot of character. If you love a night out, friendly Scots and a historic University you will love it here. Living in the west end is a must for Glasgow University students, which comes with a great vibe."

Bringing up the rear of the league table is the only Welsh location in the top ten: Cardiff. Often draped in Welsh national flags, Cardiff's community spirit (particularly during international rugby games) is reflected in the written reviews by students. The city centre houses three impressive shopping centres (St David’s, Capitol Centre and Queens Arcade) and a healthy range of reasonably-priced nightclubs and bars.

Read what 114 students had to say about Cardiff. 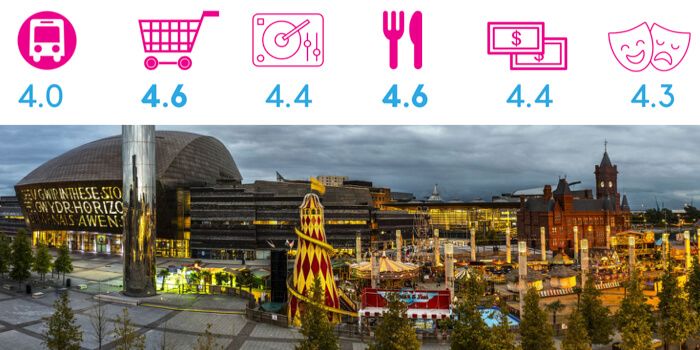 "Cardiff is the cheapest city to live in for a reason! Cinema tickets are less than £3, pints are cheap and the rent on houses are pretty good. The shopping in Cardiff is incredible - there’s a huge array of shops. Cardiff really come to life when the rugby is on. The Welsh spirit infests the city..."

Bristol earns the final spot in the Student Hut top ten. Home to a number of fiercely independent cafes and restaurants, students rated Bristol highly for eating out. The city offers a range of clubbing options, from super-club Motion to a converted-ship-cum-venue, Thekla. A vibrant arts scene, as well as beautiful natural surroundings ripe for exploration, earned Bristol a 4.4 rating in the entertainment category.

Read what 154 students had to say about Bristol. 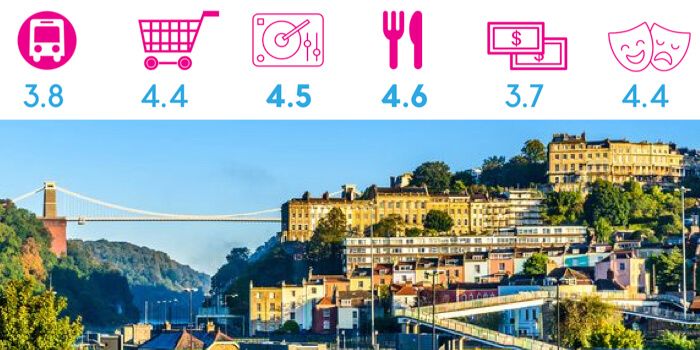 "Bristol is a really beautiful city, and the location is ideal. There are numerous clubs and bars and these are all easily accessible either by foot or a very short bus or taxi journey. If nights out are not a preference, then there is still so much to do. Bristol's harbourside and docks are breathtakingly beautiful..."