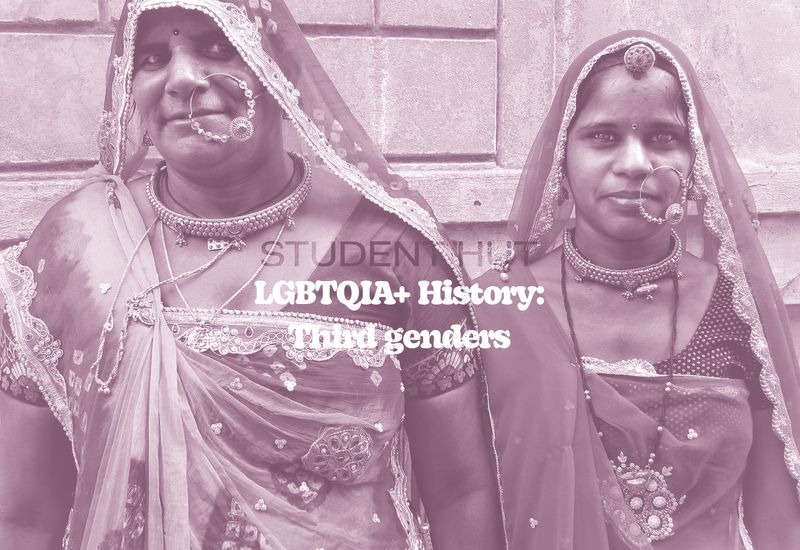 Let’s take some time to remember that third genders have existed throughout human history.

To some, non-binary identities may seem like a new concept, but the gender binary is something that has been imposed on the world by colonial forces.

What's the difference between sex and gender?

The concepts of sex and gender have been spoken of as separate since roughly the 1970s. Sex being the biological traits of a person, their primary and secondary sexual characteristics. Gender describes the cultural role they play in society, the expectations placed upon them, and how they view themselves within society.

In the context of gender variance throughout history, third sexes and third genders are somewhat interchangeable terms. Many of the cultural identities referred to as ‘third genders’ refer to differences in either sex or gender presentation. The binary view of gender and sex is a relatively modern eurocentric idea.

What are some examples of third genders throughout history?

Some may try to tell you that non-binary identities are a modern fad, but that’s simply not true. From Mesopotamia, one of the origins of early civilization, ancient tablets have been found that tell a creation story in which man, woman, and a third androgynous person were the first humans.

Classics students may be familiar with references to eunuchs in ancient Mediterranean culture, a group of people treated as existing somewhere between man and woman.

Ancient Indic and Vedic cultures had sacred texts that described people as belonging to one of three gender categories. In the Ramayana, a Sanskrit epic poem, Rama is exiled, followed by those from his hometown. Upon telling the men and women to go back, those who were neither didn’t know what to do and stayed in the forest, being blessed by Rama when he returned and found them still there.

Why have so many places abandoned their concepts of third genders?

Many will cite colonialism and imperialism as the reason for the erasure of certain identities around the world, as well as the introduction of homophobia to many countries. This claim is based in truth. A notable example is the suppression of the hijra identity in India when British imperial forces introduced a law in 1897, classing them as criminals.

What are some current examples of third genders?

Many cultural third genders survive to this day, despite the actions of imperialists. For example, the hijra of India finally won legal recognition in 2014. This isn’t an exhaustive list of every identity but a starting point to understand the limitations of the eurocentric views of gender. These and other third-gender communities are still thriving today:

What other LGBTQ+ topics should we cover? Join our panel and let us know. You’ll get 1000 reward points for signing up.